Organic vs. Carbon Farming: What’s the Difference and Why Does it Matter?

Ryan Stockwell is a Wisconsin farmer who helps farmers solve problems on their farms with Carbon by Indigo.

“But I already buy organic, what is this carbon farming stuff I’m hearing about?” Isn’t organic the best for the environment?

Many consumers and business leaders watching the growth of carbon farming from the outside are asking, so what is the difference between organic and carbon farming? To simplify, let's break it down into three categories: goals, methods, and significance.

Organic has a clear goal of producing food and commodities without the use of inorganic fertilizers or chemicals. Some fertilizers and pesticides may still qualify as organic and thus can be used in organic production. Carbon farming has a goal of building the productivity and capacity of the soil to produce crops for future generations while generating carbon credit income for increasing carbon stored in the soil.

Organic achieves its goals by the obvious omission of many fertilizers and pesticides while carbon farming focuses on the application of five principles: minimizing soil tillage, maintaining residue to protect the soil, keeping a living plant for as much of the year as possible, maximize crop and plant diversity, and incorporate livestock when possible. In some ways, organic also applies these principles, particularly crop diversity. However, in order to eliminate chemicals, many organic farms rely heavily on tillage to accomplish weed management.

Organic certification can provide some certainty to consumers regarding promised outcomes. However, the price premium and high level of documentation can encourage falsification while also posing significant transition barriers for many growers while not providing certainty that the soil is being managed in a way that builds its health and productivity. Carbon farming crops are not clearly defined with set practices or standards, however, increasing soil carbon can provide a means of proving the soil is being improved over time. Carbon farming also provides much easier entry for growers as they can add one practice at a time as their equipment and learning allows. 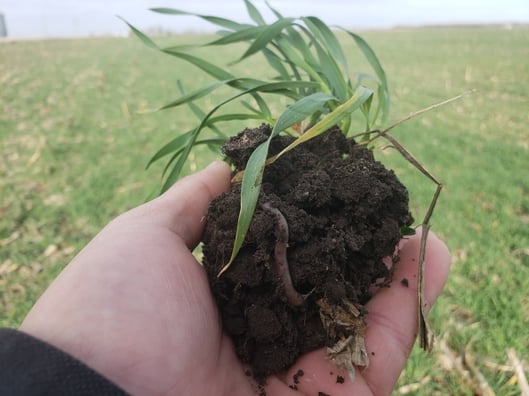 When it comes to answering the question of which is better for the environment, beauty is in the eye of the beholder. For some, the idea of zero chemicals is very appealing. For others, ensuring the land can be productive for future generations is preferred. One thing is for certain, carbon credits create an easy pathway for conventional growers to slowly transition into practices that can increase revenue while more closely aligning with long term goals.

What is Carbon Farming?

Why Farmers Should Care About the Quality of Their Carbon Credits