Meet the Haynie Family: Seeking Equity and Education in Farming

“When talking to my granddad, I learned that when he started out, people would come burn his stuff down. Our hog pens were burned down. There were death threats sent to our house. So, it's definitely difficult,” says 19-year-old Colette Haynie while standing in one of their Arkansas fields with her dad, P.J. Haynie III, a fifth-generation row-crop farmer and chairman of the National Black Growers Council. “I definitely appreciate my dad for taking the role of chairman of the National Black Growers Council. Building a community for African-American farmers is probably the best thing that you can do for them because it's a community that has historically faced discrimination.”

According to a recent McKinsey study, 1.4% of farmers today identify as Black or mixed race, compared to 14% a hundred years ago. This research found that Black farmers lagged behind their peers due to discriminatory lending practices, lack of legal protections that ensured the passing down of land and generational wealth, and federal programs and policies that excluded Black farmers.

“We learned early on that a lot of the information that was being passed down in the field of agriculture to farmers wasn't making it down the gravel roads that Black row-crop farmers lived and worked and operated on,” says P.J. His great-great-grandfather was one of the first African-Americans in Northumberland County, Virginia to come out of slavery and purchase land in 1867. The family still owns this land. “We needed a conduit to help make sure that information got passed along from corporate ag to Black farm; the National Black Growers Council is the conduit to really help to make that happen.”

“The National Black Growers Council's mission is to improve the efficiency, productivity, and sustainability of Black row-crop farmers,” says P.J. “We do that through a series of field days that we host around the country and our annual meeting that we have at the end of the year.” During these field days, Black farmers have an opportunity to come out to meet other Black farmers, ask questions, and meet with some of the companies that support the organization.

Like community, family is the cornerstone of Haynie Farms. After getting a degree in agricultural economics from Virginia Tech, he decided to come back home to farming. “I'd say I've got an enhanced education from the school of hard knocks and from the Haynie school of hard knocks—my father's education,” he jokes. “Working with him for 20 some years, side-by-side, listening to what we did right, what we did wrong, that is the key. I don't think a textbook education and a bachelor of science degree could have prepared me for all the challenges that are faced in farming.” Today P.J. farms with his father, sisters, and multiple other family members.

As for his own three kids, it will be their choice to decide to farm—or potentially follow in the footsteps of their mother to be a doctor. Colette, the eldest, is pre-med at North Carolina Agricultural and Technical State University. She has an interest in farming, which led her to spend her spring break with her dad learning more about soil health.

“Some of the best things that I've raised have not been in a field, it's been my children,” says P.J. “I'm proud of all of them. They knew early on that I'm okay if they didn't want to go into farming. They don't have to become farmers, but I want them to understand the hard work that their ancestors and their grandfather and their father put into building something for them.”

After studying biology in college, Colette is keen to understand how carbon farming improves soil health. “I've noticed is that with the conventional farming, the soil gets a lot more dry and it's harder when you have that small window of getting things done per se, when it's really dry. Planting and trying to make sure that the plants have enough water for them. It's a lot harder just because of how dry the soil is,” she says. “Whereas, with carbon farming, you have the crops on top that kind of act as my dad said, like a blanket and they keep moisture in the ground and it's a lot better as far as moisture for the plants as far as I've noticed.” 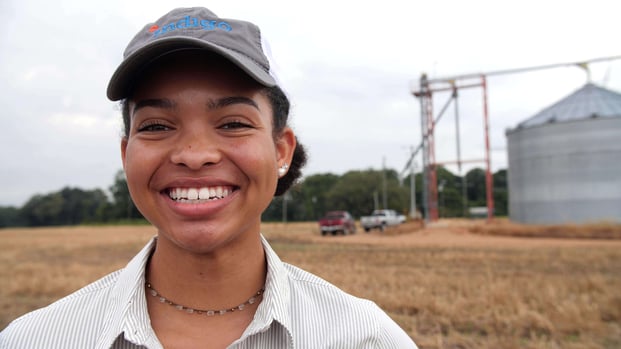 Colette Haynie is a pre-med student and spent her school break learning about farming with her dad, PJ, in the Delta.

Haynie continues to strive to increase the representation for people of color in agriculture. He was just named to the USDA’s Equity Commission. He also is a board member of Indigo Research Partners. “We are honored to have P.J. Haynie serve on our Indigo Research Partners board,” says Loston Rowe, Indigo Research Partners (IRP) Grower Relations Executive. “P.J. and other National Black Growers Council members provide valuable feedback to Indigo, and we support their mission by sharing new technologies and opportunities directly related to their farms.”