Larkin Martin manages a family-farming operation in Courtland, Alabama, where she raises cotton, corn, soybeans, and wheat. Her cotton is now part of a sourcing collaboration with The North Face to craft clothes with regeneratively-grown materials. The premier outdoor apparel and gear brand is not only paying for sustainable and well-made raw materials, but also ones with a clear and strong history for end customers to appreciate. When Martin, an art history major, took over the farming business from her father in 1990, she became the seventh generation to manage the land—and brought with her a discerning eye, fresh perspective, and global mindset.

“The crop mix has changed over the years,” she says, “but some of the areas and the fields that we're planting, I think we're approaching 200 years of continuous production.”

Martin’s land is not simple in layout or needs or responsiveness. It, instead, stands as a portrait of the variability possible in agriculture. Rolling fields spike up to hills and down to low stretches. There are many soil types and the temperature can change 20 degrees in 12 hours. 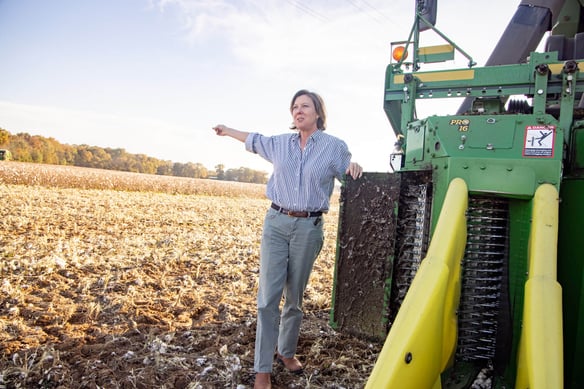 This variability, though, is all a backdrop for a consistent business – consistent by design, consistent from generation after generation of will and focus, of addressing challenges in sustainable ways.

Take the accounting. “My father, much more so than I, was a record keeper,” Martin says. “He was really focused on it from a cost standpoint. He wanted to know exactly what he spent on each crop. I inherited systems that we've maintained and improved for generations, as technology and software now allows us to improve even more rapidly.” Martin here downplays her own technical prowess. Before returning to the farm, she had several roles at the accounting firm Arthur Anderson and a series of jobs in the Treasury Department.

Also, take the farm’s focus on soil health. Cover crops, crop rotations, and no-till have been in broad use long before they came under the present day moniker of “regenerative.” The importance of these techniques is to retain and improve the soil. Martin is more direct when asked what started her use of these regenerative practices. “We were motivated by economic problems,” she says.

One of those problems was soil erosion. Even after building in waterways and terraces recommended by different soil conservation services, topsoil was still sliding off of those rolling fields in alarming quantities. The top six inches of dirt in a field is the farmer’s most important capital. Without it, like any business starved of capital, the farm would default, its promise of bearing harvests rendered insolvent. The most effective fix for this erosion, after experimentation throughout the 90s, turned out to be keeping the right blend of living roots in the ground (cover crops) and reducing soil disturbance (no-till).

Another problem was pests – nematodes, a soil-borne insect in cotton, to be specific. At the time, somewhere between 80 to 90% of Martin’s land was in cotton production. “It was almost a monoculture,” she jokes. “I inherited responsibility for an operation that focused on cotton and raised cotton continuously.” No chemistry available could effectively control the nematodes. They were a drag on plant health and yield and their numbers increased each year a host crop was grown.  Corn, as it turns out, is a nematode-suppressing rotation crop; beginning to rotate out cotton fields for corn helped Martin raise cotton with reduced pest pressure the following year.

Crop rotations also brought their own form of economic risk mitigation. “The prices of corn, wheat, and soybeans have become more competitive over time,” Martin says. “We’ve positioned ourselves with equipment and employees so that we can raise a combination of those four crops, with thoughtful rotations between them, always. We always raise cotton behind corn because of nematode suppression. We try to put corn in behind soybeans because, hopefully, there's some residual nitrogen that's helpful in the corn. Practical things like that helps us to build soil health and allows us to participate in more markets.”

As the always vigilant CEO of her farm, which is owned by Martin, her mother, and her three sisters, Martin is keeping an eye on another market booming with interest: carbon.

She sees the opportunity for farmers to generate carbon credits by using regenerative practices as hopeful, a chance for farmers “to build a different kind of value on their operation than they have ever thought about before.”

Cover crops, reduced or no-tillage, crop rotations: these practices in of themselves, for many of the reasons Martin has discovered herself, are good investments. Their ability to also grab carbon out of the air and store it in the ground at a rate that interests many of the world’s leading brands (like The North Face) is merely a “motivating layer” for newcomers to give it a shot, Martin thinks. And traceability of the crops produced with those practices represents the next step in the evolving process.

“The cotton supply chain is unique and long and complicated,” Martin says. “But it will soon be possible to know where a garment came from, the conditions under which it was raised, where it goes after it leaves the farmer’s field and before it becomes cut and sewn together. That is an opportunity of increasing interest to consumers, so I am glad to be a part of it with [The North Face deal].”

Now that she can see the continued, financially compounding opportunity for regenerative practices, Martin is focused on bringing more insights back to the farm, to those working there every day. “Anybody is going to do a better job with a task if they understand the task and believe the task is worthwhile,” she says. For Martin – or anyone running a business – the goal is to transfer energy and vision and rationale for why a change, even one practice change, is that important for those implementing the vision every day.

*Individual grower experiences may vary. You should independently consider the risks and benefits of the adoption of any agronomic practices on your farmland.

Interest in implementing some of the practices that Larkin uses on her farm? Want to support farmers like Larkin?

For Farmers for supporters