Kasey Bryant Bamberger is a third-generation partner in Bryant Agriculture Enterprise. That’s a general title, with broad responsibilities, from running the financials to ensuring safety and compliance, selecting crop insurance to driving public relations. With a collective footprint of 16,000 corn and soybean acres, the Bryant’s operation spans six counties of southwest Ohio—all of which are under Kasey and her cousin Heath’s trained operational eye.

Bryant Ag has long been an early adopter of new tech—from auto-steer equipment to managing their inputs down to the plant. Now the operation is making the transition to beneficial practices, so far cover crops and no-till, that use nature to enrich the soil and reduce net on-farm greenhouse gas emissions. Find out why she’s inspired to help develop agriculture as a nature-based climate solution. 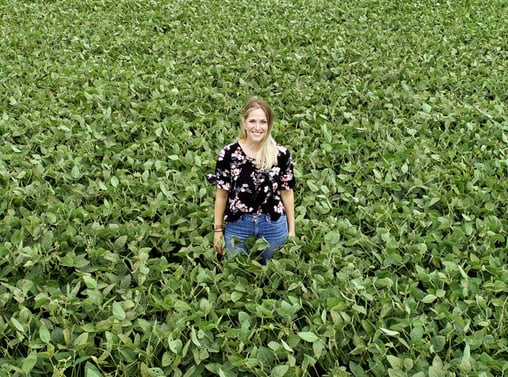 How has your operation embraced the use of technology?

We track every input that goes onto each individual field, and then the grain that's coming off of it, where it's stored, where it's delivered. It's very important to us that our team has that same mindset and that they understand the importance of the traceability of the crop that we're growing.

All of our equipment essentially works off of GPS, where we can set lines within the field and now it's the point where the equipment, we can even do the end rows. So it's not just back and forth. And essentially the equipment can drive itself, like a Tesla in the field. The everyday American is just starting to think about self-driving cars. Self-driving tractors have been around for awhile.

Your operation also strives to use inputs efficiently. Why?

The things that are most important to us as growers are, number one, to be good stewards of the land. We lease the majority of the farms that we farm, we don't own them. And so it's very important to us to make sure that we are treating the ground as if it was our own. Our goal is not to take away from the soil, to make sure that it's going to be a good profitable soil for many years to come. We would like to be here for the next 100 years to make sure that our kids and our grandkids and our great grandkids are given the same opportunity that we were.

Your farm started using regenerative practices, such as cover crops and reduced tillage, this year. What made you decide to start this transition?

We're looking long-term and saying, "Okay, what can we do as an organization to start to incorporate some of these regenerative ag practices? We know that we can't deploy them across our entire operation immediately, but what can we do today? If we look out five, 10 years, is it a possibility to have separate crops on every single one of our farms? And if so, what does that work flow look like?"

We had some farms out this year that were no-till and a full cover crop. We also have some research plots where we're comparing, and I won't have the data until post-harvest. Where we have plots with cover crop and no cover crops.

We're having to learn, as a large-scale operation, how we incorporate some of these practices and still continue to do what we're doing. We're finding that to be able to slowly deploy some of these things long-term is going to have a really good benefit for our operation and the planet.

What have you noticed so far in using cover crops and no-till in this first year?

We  noticed a large reduction in weed pressure. Basically the cover crops shaded out any weed growth that we typically see or we saw in neighboring fields. If we consistently see this result, I can see us backing off a whole lot of chemical inputs and passes through the field.

What have you seen with your microbial seed treatments?

As far as microbial success, there have been instances where we have seen certain treatments win side-by-side yield comparisons. I know that other farms have seen significant increase during droughts. We have not faced any droughts the past couple years, if anything too much water in the beginning of the growing season. This year we have had a hot, dry summer until recently, so I’m interested to see how they perform.

Why were you interested in being involved in Carbon  and essentially getting additional revenue for drawing carbon into your soil?

There's always trying something new on the farm. So to be able to plan for a little bit of extra income for trying new things has made the program intriguing. There's probably a lot of growers who are very interested in doing some of these regenerative practices, knowing that there may be a direct benefit to the soils.

Also from an environmental standpoint, these are some of the things that as an organization we had already talked about doing. Last year we had wildflower plots out, making sure we were giving back to the soil. We want to do our part, while continuing to increase the high yields we’ve seen today to a hundred years from now. I’m young in my career. Based on conversations with the generations before me, the weather is changing. We've had a couple of tough springs, we've had very mild winters.

Our industry is so reliant on the environment. We’re passionate about making sure that we're doing everything that we can for the future. We can play a big part in a solution when it comes to the carbon that we're putting into the atmosphere.

Kasey Bryant Bamberger and her family support discovery and innovation in the world’s largest agricultural lab, Indigo Research Partners. They have also enrolled in Indigo Carbon using cover crops and reduced tillage, and use Indigo Marketplace. Lastly, they have used nature-based seed treatments with both their corn and soybeans through Indigo Biologicals.

Represents views and opinions of the grower. Results may vary depending on a number of variables. Indigo does not make any representations, warranties or guarantees as to any specific outcomes or results.

For Farmers For supporters