“As a commerce company, Shopify champions entrepreneurs around the world, and we want to make entrepreneurship accessible for anyone everywhere,” says Stacy Kauk, Director of Shopify’s Sustainability Fund. “If we want entrepreneurship to be prolific over the long-term, over the next hundred years, we have to future-proof our business. We need to make sure we’re addressing the threats to entrepreneurship.” Climate change, Kauk says, is one of those big threats.

There is an undeniable risk investing in climate solutions today, both in scope and in effectiveness. “Soil” makes up nine percent of Shopify’s allocation, a portion of which is directed towards farmers who generate carbon credits as part of Carbon by Indigo. Today a growing number of brands across industries are realizing that agriculture presents a powerful tool as a climate solution with a multitude of beneficial outcomes.

“When we think about farmers, they are very much a foundational entrepreneur, and they underpin a lot of the functioning of our society,” Kauk says. “We need to make sure that we're supporting climate solutions that also support the livelihoods of those that we rely on.”

We spoke to Kauk about her work at Shopify and how they are leading the way to support small businesses globally. 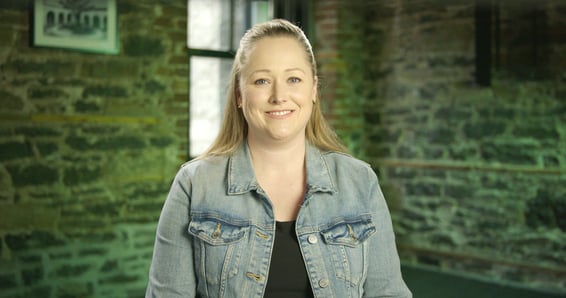 What is Shopify trying to impact through the Sustainability Fund?
Shopify has over 1.7 million merchants around the world. If we're able to leverage our reach to use commerce for good and really contribute to reversing climate change, we can help those merchants.

How does climate change impact fit into a commerce platform?

We invest in sustainable practices and technologies to fight climate change for two reasons. One, we actually have a mission to be a hundred-year company. So, if we want entrepreneurship to be prolific around the world, in the long-term with that 100-year timeline, we have to future-proof our business, and we need to make sure that we're addressing threats to entrepreneurship.

When we think about it that way, climate change is certainly a threat to entrepreneurship. The folks that need entrepreneurship to build value for themselves, their family, and their community are often the groups that are more adversely affected by climate change. So by taking action to support solutions to reverse climate change, we're relieving that stressor forour customers.

How does Shopify decide what to fund?
What we want to do with our $5 million annual fund is to identify the most promising solutions and put money behind them now, so that they have resources to prove their concept, to do things like hire senior scientific advisors, develop monitoring and verification protocols and systems, so that they're able to commercialize that climate benefit. When we think of soil carbon, we really need to make sure that the climate benefit's being measured and the carbon is being locked away for the long-term.

Isn’t it risky to invest in such new technologies?
We knew getting into this, that there's going to be some success and there's going to be some failure. And at Shopify, we have a saying that works really well: Failure isn't failure, it's actually the successful identification of something that did not work. You do get deep learning that only happens when you fail. And that is beneficial because you can then apply it, iterate and do whatever you're working on better, or know that you need to move on to something else.

How did Shopify get into the voluntary carbon market?

Back in 2019, Shopify was working towards making a carbon-neutral climate commitment. We wanted to make sure that we also addressed our historical emissions. So, we set out to buy what we wanted in terms of a high-quality carbon credit. When we got out into the market, we realized that what we wanted wasn't there. And it was starting to emerge that some carbon offsets were not actually providing the climate benefit that they claim to. There were a lot of issues around projects.

We're trying to be that demand signal in the market that then allows companies to have a complete business case. And when you have that commitment, a company like Indigo, for example, is able to work with their farmers to make sure that the farmers know there is a buyer for this carbon credit. The investments and changes they are going to make towards regenerative agriculture are going to pay off.

What are you looking for in a carbon credit?

We want them to be verified and certified through monitoring that passes a certain level of scientific rigor. And that's one of the reasons we are so interested in working with Indigo; we felt that their monitoring and verification protocol was of a high quality in the soil carbon space and gave us the reassurance that we needed in order to get involved in a soil carbon project. Indigo has the potential to achieve massive scale in soil carbon storage.

How does agriculture fit into Shopify’s sustainability vision?

Agriculture is an important factor because Shopify is a company that champions entrepreneurs and entrepreneurship. When we think about farmers, they are very much a foundational entrepreneur and they underpin a lot of the functioning of society. We need to make sure that we're supporting climate solutions that also support them. It's a really nice outcome when you can use farming and agricultural fields that the world relies on to feed itself to also fight climate change by reducing emissions and storing carbon.

One of the barriers that can happen in the soil carbon space is the connectivity between the farmer and the actual carbon credit buyer. Indigo has deep relationships with landowners and farmers. We found that working with Indigo and making an early commitment to buy the soil carbon credits from the program would provide the momentum needed to bring on the supply from the farming side of the business.

How are you helping your entrepreneurs address their own carbon footprints?

We focus on finding ways to help our merchants join us in this journey to reverse climate change. One area that we focus on quite a bit is shipping. Shipping is one of the big factors when we think about shopping. We have tools and features that are available to our merchants that allow them to calculate and offset their shipping emissions. So we're using our platform to build in these features and also to provide education. It's a very exciting space for Shopify.

How Can We Bring Transparency to Know How Our Food is Produced?