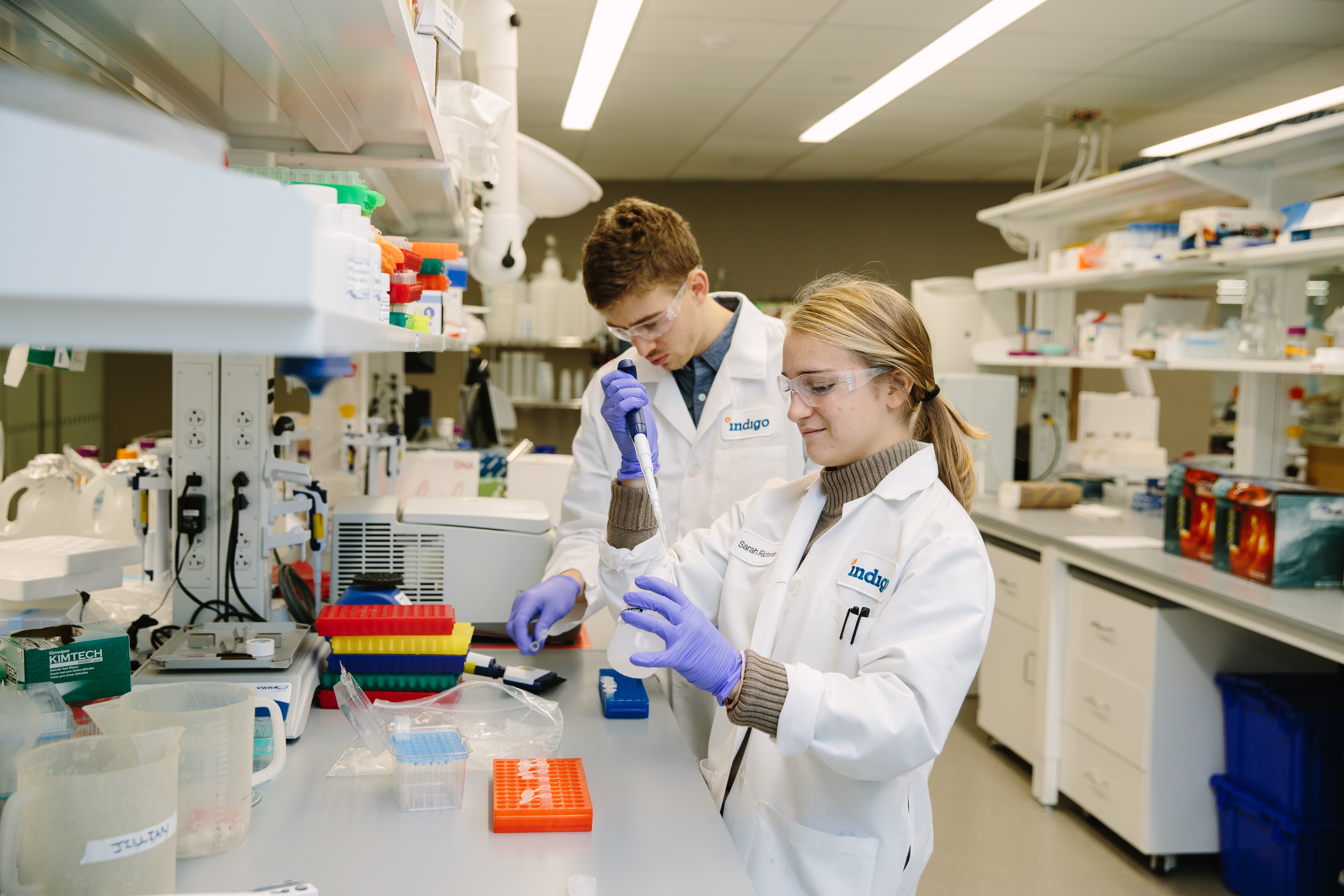 Sarah Richards, Research Associate II at Indigo, has that rare ability to switch effortlessly between left- and right-brained activities. By day, she’s all science, peering through microscopes and keeping a vigilant eye on the assays that she and her team conduct in Screening. But when the clock strikes a certain hour and she hangs up the lab coat, Sarah’s focus often shifts to artistic pursuits. She’s not only a regular at Somerville’s Mudflat Pottery Studio but also an entrepreneur, running an Etsy store filled with her hand-crafted, guitar-string bracelets. She has a diverse academic background as well, having dipped her toes in marine ecology before settling on microbiology as her college major.

When I located her in the lab, she was busy demonstrating her pipetting prowess. I pulled up a chair to hear about her career path, how science functions as a universal language in the world today, and why reading the manual is never a bad idea when learning to operate SUV-sized lab machinery...

TO START OFF, HOW DID YOU ARRIVE AT INDIGO?

It was a connection—a college professor knew Victoria [Knight-Connoni, Senior Director of Microbial Evaluation] and put us in contact. At UNH, I minored in nutrition and majored in microbiology. It’s kind of an unusual pairing, so coming here was a nice marriage between nutrition, food systems, and microbiology. I was—and still am—very excited to be in an environment that is so relevant both things I studied.

WHY WERE YOU DRAWN TO MICROBIOLOGY IN PARTICULAR? WHAT INSPIRED THIS FOCUS ON THE CELLULAR LEVEL?

I had been struggling since high school with stomach problems. For many years it seemed like the most innocent health foods were causing me to feel sick. It was something of a mystery to me and to my doctors, even after I had been diagnosed with Celiac, which means your body produces a harmful immune response to the protein gluten in wheat. (It’s kind of ironic—I work with wheat every week here at Indigo!) When I started to hear all the hype around the idea of the gut microbiome and its implications on human health, I figured I might as well major in something that I was already spending half my free time learning about—something new and exciting that the scientific community was turning its eyes to.

Through this combo of majors, and working with an amazing nutritionist on campus, I was able to figure out how to heal my own gut and live a happy healthy life at UNH. So that was the original intention when choosing my majors. Hearing about plant microbiomes was a whole new area for me, but I like that microbiology has provided a flexible skill set.

"I really appreciate the fact that we're so young in our career, but we get to work at a place that has such an inspiring mission."

YOU BEGAN AS A MARINE BIOLOGY MAJOR. DO YOU FIND THE EXPERIENCE YOU ACQUIRED THERE TO BE APPLICABLE AT INDIGO?

Yeah, definitely. I think science is a universal language. There’s a lot that has to be done in order for another scientist to take you seriously, to really believe the conclusions you may draw from an experiment. The scientific method is the strongest thing we have to prove to fellow scientists that our discoveries are valid, so that’s definitely a skill I picked up with those other experiments—just how to produce credible work. And also, how to read a paper and understand it, how to dissect bits of obscure information so that you can talk to people from different backgrounds and be on the same page with them.

I don’t know how similar they are, but they definitely have microbiomes. The more we learn, the more attention we pay to the fact that animals, insects, leaves, stems, roots—the list goes on—have microbial communities living on or in them. To think about not only our microbiomes, and how much we don’t know about them, but also those of all the other life forms out there…and how much there is to learn about them, too...it’s crazy! Who needs to go to Mars when we can go inside a soy nodule?

TAKE US THROUGH A TYPICAL WORKDAY AT INDIGO. WHAT'S ON THE AGENDA?

No day is the same, but we aim to keep a weekly schedule so that we know Mondays are for meetings, or Tuesdays for data analysis, etc. We put order to it, and then work around it as necessary.

I’ll start with screening. We, as a company, have access to a lot of strains through collaborators and our own sourcing, and our Culture Collection team works with them to get those strains in-house. As a result, we have thousands and thousands of strains at our fingertips, but now we have to figure out which of those would be good products for us. So how do we do that? We screen them in a high throughput way, regularly running routine assays—for example a root vigor assay, which will predict weather a microbe will have a beneficial effect on the root growth or shoot growth in a given crop. If it does, then it moves on to other assays, and subsequently gets filtered through the pipeline. We end up with a much more manageable number of microbes to test in greenhouse and field trials.

HOW DO YOU APPROACH PROBLEM-SOLVING AS A TEAM?

Throughput is always a challenge for us; we’re always trying to make it better. With a team of six or seven, we’re constantly re-thinking our methods to get as many microbes screened in the most efficient way, given our resources. So that means a lot of automation, organization, and figuring out how to make things more time- and cost-effective. For example, we’ve been working a lot with a liquid handling station, which is quite the fancy machine. Have you seen it? It’s like the size of this room! Imagine yourself going right now and trying to figure out how to work it—because that’s where everyone started. It comes with a manual, but we’ve been working with consultants and investing in employee training in order to speed up the process.

WHAT DO YOU FIND MOST REWARDING ABOUT YOUR JOB?

I really like working with my team. I think it’s cool that a lot of people here are young in their career, especially people that I work with. It’s been extremely helpful to meet to people who are in a similar place, as well as those who are a farther along in their careers. I have been able to talk to people with all kinds of backgrounds and learn about their paths.

But there’s also Indigo’s mission; I really appreciate the fact that we’re so young in our career, but we get to work at a place that has such an inspiring mission: “harnessing nature to help farmers sustainably feed the planet.” It makes the more menial tasks (that you’d get with any job) all the more worth it, and it really makes me feel like I can have a positive impact on our company’s products, and thus, modern agriculture. I mean, we just had Governor Baker come in here and give us a big thumbs-up on what we are doing. How cool is that?

HOW DO YOU SPEND YOUR TIME OUTSIDE OF WORK?(ADMITTEDLY A LOADED QUESTION, AS I HAPPEN TO KNOW YOU'RE QUITE THE ARTIST!)

I think the most “formal” hobby that I have right now is pottery. There’s a pottery studio like 10 minutes away, so on my walk home, I’ll often stop in. Other than that, I write a lot, I love the ocean, hiking, tennis, travel, and I’m also thinking about sailing this summer! I don’t know how to sail, but you can learn for a decent price on the Charles.

I KNOW YOU ALSO MAKE BRACELETS OUT OF GUITAR STRING. HAVE YOU KEPT THIS UP?

Yeah, still doing that! I haven’t been doing it quite as much since I have a lot going on right now. When I put stuff up there [Fine Tuned Jewelry] it tends to take my time away from me. I’m going to make it a seasonal thing around November and December—the end of the year, when everyone is trying to buy gifts and stuff. I’ll do any custom order requests throughout the year though.

ANY FOOD (OR BEVERAGE) YOU COULDN'T GO WITHOUT?

I couldn’t live without plain Greek yoghurt. And tea!