Before Mike Bretz was figuring out how to capture carbon in his family farm’s soil, he was in a boardroom working to take carbon out of his company’s supply chain. The project – which included reducing travel and optimizing backhauls, offsetting with carbon credits and planting trees – was the culmination of a 30-year career in the food industry. For Mike, it was a months-long crash course in how much one company could scale back their carbon footprint, help to preserve our climate; only when you’re forced to save do you realize how much you spend.

The project concluded, and Mike was at a place to think about retirement, when a new opportunity came up: going back to the farm he grew up on, in Troy Mills, Iowa, after both his parents had passed away, to run it. First, though, he had to figure out how the farm could make a profit. That question led Mike to read up on Joel Salatin and Gabe Brown, farmers celebrated for their work in soil regeneration. The promise of low cost, high output sold Mike. Find out what his experience has been getting started. 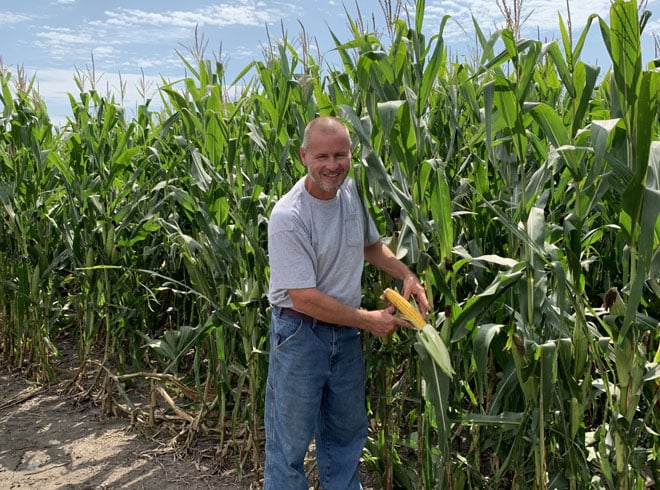 What made you decide to try beneficial practices?

I probably listened to Dirt to Soil 15 times driving up and down the highway and in the tractor. Each time, I hear something a little bit different. So my wife and I decided two years ago that we were going to start walking down this path. Last year we did 12 or 13 experiments on the farm, small experiments. Reading in a book is one thing, but actually doing them yourself and seeing results on your own land is pretty eye-opening, pretty eye opening for sure.

Does the potential to address climate change inspire you?

In my last year working in the food manufacturing business, I had done a project on reducing carbon footprint in the supply chain and learned quite a bit about carbon and what we need to do to make agriculture more beneficial for the climate. So, we jumped in with both feet in 2020, did all 500 acres and cover crops. Quite a few learnings along the way. I've got the support of Evan Brehm, an agronomist from Indigo, and Tom, an Indigo soil scientist. Been out a couple of times and we put together a three to five year plan of how our rotations would work and jumped right in and had many learnings with that along the way.

What have you seen so far?

I think we can make some serious improvements in just a year or two. For one example, I took a three-acre plot and planted oats. I was going to cut it for our 27 cows, use it for feed. The weather wasn't supposed to rain for five days, but it actually rained five days in a row. So it didn't matter how much we raked it, it wasn’t good for the cows anymore. I ended up not harvesting it. I let the rows grow about two feet wide, probably four inches thick of just oats. That's a little test plot. I came back a month or two later, and I could pull that back and push a  spade easily push it into the ground. In one handful of dirt, I counted five to seven worms. There's all kinds of wormholes and worm castings in that soil.

Then I went just 20 feet to the side, which was the same field, but I actually planted corn and we had sprayed it and did all of our normal herbicides. That ground was hard. There wasn't a worm to be found. It's just amazing that just 20 feet away, on the exact same soil what a change we had seen. That brought to the forefront of my mind, this concept of the armor on the soil. It's almost like a rooftop over our biology. We have to protect that biology and let it do its thing. If we let it do its thing, then hopefully they're going to create so many nutrients we no longer need the fertilizers.

What is your goal for your farm?

The farm’s been in the family 90 years. I'd like to pass it on to my kids, ideally without any debt. So that's kind of a front runner there. I don't have grandkids yet, but if you think about that, are they going to be walking in the dirt or are they going to be out playing and grass and flowers and pollinator strips and those kinds of things? So that kind of helps you get there as well a little bit. Ideally we're going to reduce the fertilizer and the weed spray and herbicides that we put on. We're going to increase the amount of wildlife that we have out there for everyone to enjoy. That's going to create something for the future, for everyone.

Then if we can also pull in the carbon and get that into the ground, that's actually going to make our crops better. Right now I'm working on reducing the inputs as much as we can, making a better world for the wildlife. Ideally our yields won't go down too much. Maybe they'll even increase. There's been some examples of that. Various farmers who've tried this. We're certainly on target for that. Now when you actually have the crop, the micronutrients in that crop are certainly going to be better.

One of the things I enjoyed about Indigo was the conversation around, can we change this from a commodity to more of a crop that has higher nutrient value? Maybe there's a premium on actually selling on that end. So I haven't got too far down the road on that one yet. As I figured it's better to get the crop in the ground and get it harvested and see what our nutrient values actually are there. Those are all things that kind of roll into why it's a good path to go down. At the end of the day, I don't think we can go wrong.

*Represents views and opinions of the grower. Results may vary depending on a number of variables. Indigo does not make any representations, warranties or guarantees as to any specific outcomes or results.

For Farmers For supporters