The 26th United Nations Climate Conference (also known as the Conference of the Parties, or COP) took place over the past two weeks in Glasgow, Scotland. It brought together climate negotiators from all UN member nations, as well as tens of thousands of NGO, academic, and private sector stakeholders to debate, discuss, and collaborate on the myriad issues related to mitigating and adapting to global climate change. In recent years, conversations around climate change mitigation have expanded to include greater focus on natural climate solutions, rather than purely on emission reductions from energy and industrial sectors.

Our delegation of three: Guy Pinjuv, Max DuBussion, and Bradley Rochlin in Glasglow.

Our delegation of three was heartened to see agriculture gain a more prominent place in these conversations, and we found universal praise and excitement for how far Indigo has advanced the science and policy around agricultural soil carbon quantification. We observed four significant themes at COP26 that are directly relevant for agricultural carbon:

Week 1 saw the launch of the voluntary market-focused Business Alliance for Scaling Natural Climate Solutions (BASCS) and an overall focus on defining a high bar for quality for credits, and increased transparency into project impact. One good example of this is the efforts of the World Economic Forum and the Natural Climate Solutions Alliance to highlight particularly high-quality efforts through their UpLink Challenge and support for Lighthouse projects. As part of their panel on “Financing Nature-Based Solutions,” Indigo was able to share with the COP audience an example of our satellite monitoring technology and some of the ways we can verify adoption of beneficial practices such as reduced tillage and cover crops.

On full display at COP 26 was the increased role that corporations and governments see carbon markets playing for unlocking financial support for climate mitigation and adaptation activities. A plethora of carbon-market related initiatives launched or expanded in scope throughout the two weeks.

We also saw demand-side initiatives from World Business Council for Sustainable Development (Regen10, focused on scaling regenerative practices globally) and World Economic Forum, amongst others. Along with these specific launches, there was an acceleration of commitments to net zero emissions targets and climate finance across the board. Of course, the proof will be in the follow-through and turning those commitments into action, but the level of stated ambition is far higher than ever before. 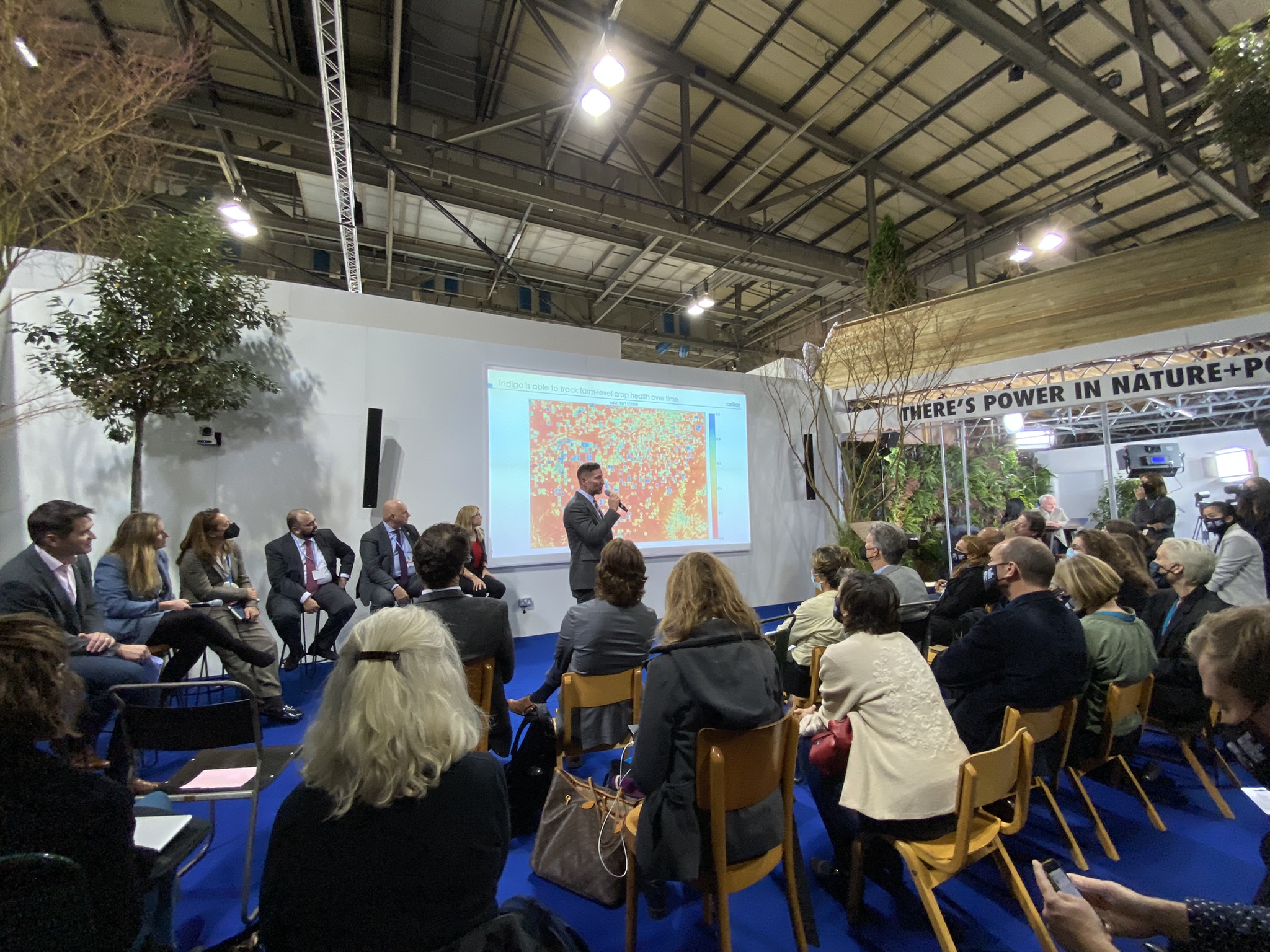 The US and United Arab Emirates, along with several partner nations, announced the launch of the ambitious Agricultural Innovation Mission for Climate (AIM4C). With over $4 billion (US) in funding already pledged, this effort could significantly advance global activities aimed at supporting farmers in their transition to more climate-friendly and resilient farming practices. USDA Secretary Tom Vilsack spoke at several events across multiple days, part of a significantly-increased, and welcome, US government presence at COP. Many farmer groups, including the World Farmers Organisation, Solutions from the Land, and the National Farmers Union, were heavily featured in those discussions around the role agriculture can play as a climate solution.

COP26 concluded last weekend with the adoption of the Glasgow Climate Pact. Amongst other outcomes, the agreement has finalized the long-awaited rules around carbon trading under Article 6 of the Paris Agreement, which will provide additional clarity for governments, project developers, and all carbon market participants around the accounting rules for emissions trading and how to avoid “double counting” of emissions. The agreement also represents the first time that a reduction of coal and fossil fuels has been explicitly included in an international climate agreement—though most external observers agree there is still quite a long way to go.

COP26 confirmed that the voluntary carbon market is quite strong, and is rapidly expanding and maturing. Private sector action and ambition are intertwined with official government action and ambition. They feed each other. And, the level to which the private sector is now stepping up gives us optimism that typically-recalcitrant governments are feeling more pressure from the business community to take action and enable their people to benefit from the ever-expanding green economy. Indigo looks forward to nurturing the relationships we have forged, at COP or otherwise, in order to be a meaningful catalyst for greenhouse gas (GHG) reductions and enhanced soil carbon sequestration on working agricultural lands around the world.

Learn more about the science behind Carbon by Indigo

The Key to Agricultural Carbon Markets: Measurement and Verification

A Major Milestone for Measuring the Climate Benefit of Agriculture