Boston, Massachusetts, July 21, 2016 — Indigo, a company dedicated to harnessing nature to help farmers sustainably feed the planet, announced today that it has closed a $100 million Series C investment, the largest private equity financing in the agriculture technology sector. The round was led by the $54 billion Alaska Permanent Fund, with participation from previous investors, including Flagship Ventures, Altitude Life Science Ventures and members of the management and board. The new funds will be applied to expand ongoing research and development efforts, to extend Indigo’s team, and to scale commercial operations in preparation for the launch of the company’s second product offering later this year. As part of its long­term commitment to Indigo, the Alaska Permanent Fund also intends to invest a similar amount in Indigo’s future financings.

The global demand for water has never been greater. The increase in projected global population to 9.7 billion by 2050 will place additional pressure on water supplies. As agricultural production accounts for 70 percent of current global water consumption, more water efficient methods of food production are urgently needed.

Yield gains from modern agricultural technologies have plateaued, collectively generating yield increases of just over one percent per year. To date, Indigo has tested beneficial microbes on more than a dozen different crops across three continents in four growing seasons. Our cotton trials have consistently shown 10 percent or greater yield increases under targeted stress conditions, including water scarcity. These early indications of productivity improvements have the potential for significant impact at commercial scale. 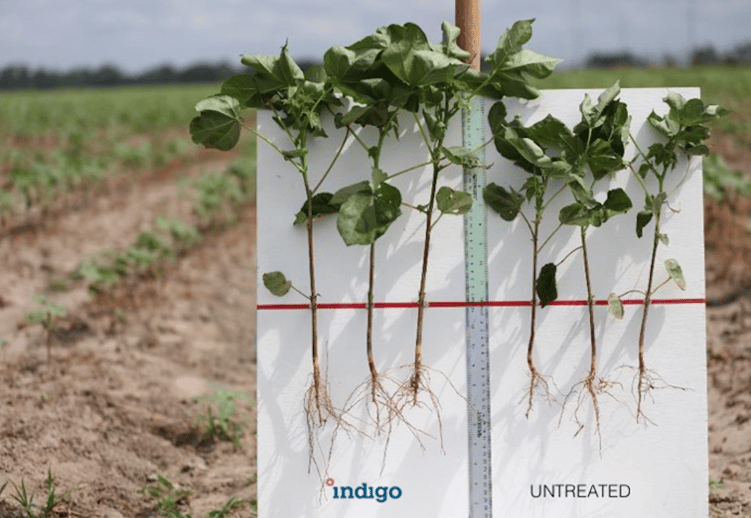 Based on these early successes, the company also announced today the launch of its first commercial product ­ Indigo Cotton, which improves water use efficiency. Indigo’s initial product has been planted on more than 50,000 acres in five states.

“Indigo's unique approach to discovery and product development brings potentially game changing technologies to market in years instead of decades," said Tyler McClendon of Oxbow Agriculture, one of Indigo's first customers who planted more than 1000 acres of Indigo Cotton. "Indigo's pricing model to only charge when there is a measurable increase in crop yield makes the decision to use Indigo's products across a large percent of Oxbow's farming businesses an easy decision because there is potential for a crop yield increase with little downside. This adds up to Indigo being very good for both the farmer and the environment.”

Indigo is gearing up operations to launch its second product later this year ­ Indigo Wheat, which will also target water use efficiency. The company is focused on consistently dry areas of the United States, which include more than 20 million acres of wheat.

“While early, we believe our approach has the potential to fundamentally change agriculture for the better,” said David Perry, CEO of Indigo. “We are committed to partnering with growers to develop this innovation to benefit both their business and their land.”

Capitalizing on the company’s Boston roots and the wealth of academic and scientific talent in the area, Indigo has recently relocated to a 65,000 square foot state­of­the­art facility in Charlestown, MA that includes research labs and the world’s largest Conviron grow room. The new facilities will accommodate the company’s rapidly growing team, which is expected to double this year.

ABOUT THE ALASKA PERMANENT FUND

The Alaska Permanent Fund is invested as a perpetual resource for all current and future generations of Alaskans. The fund is comprised of a diverse, global portfolio of public and private assets including targeted long­term investments in a few private companies, Including American Homes 4 Rent (NYSE: AMH), Denali Therapeutics, and Juno Therapeutics (NASDAQ: JUNO).