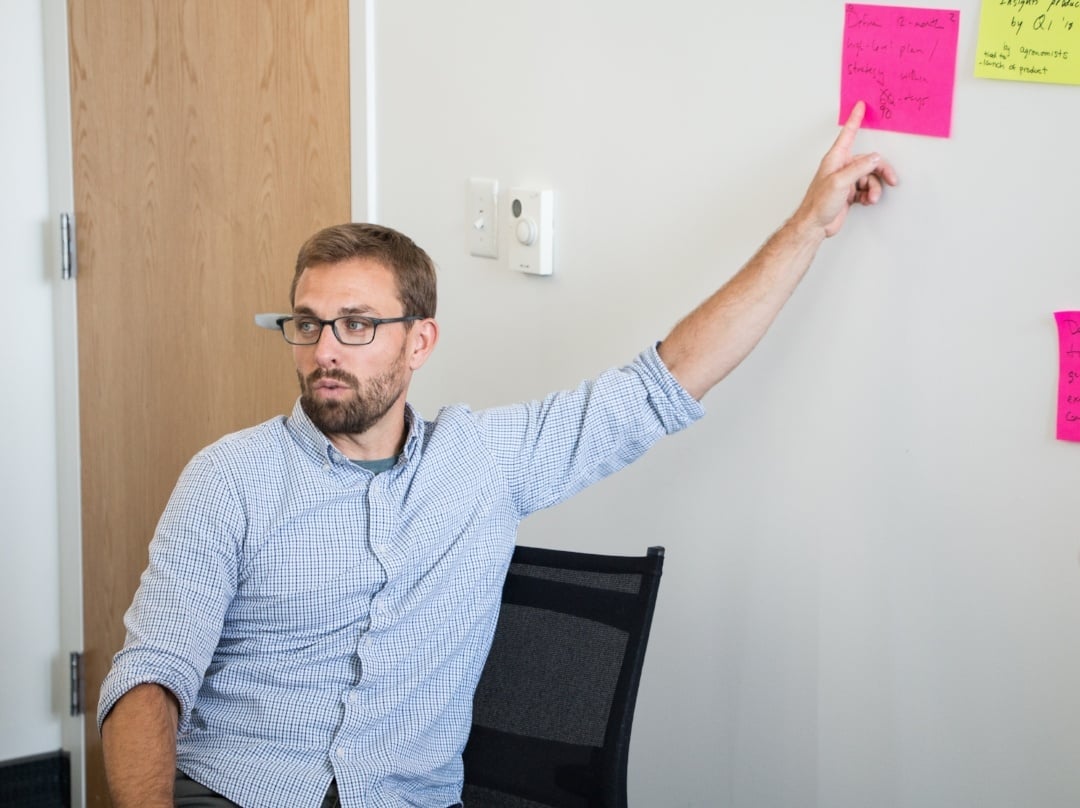 In Boston’s burgeoning software space, Jeremy Crane, VP of Software Product Development, is an old hand, having held a range of high-level roles at data and analytic companies like Compete, oneforty, and HubSpot before arriving at Indigo last spring. But Jeremy’s skillset goes well beyond the realm of computers and mobile apps. He’s a “hands-on” leader in the truest sense of the expression—hands on the wheel, that is. “I drove a silage chopper long before I ever had a license to drive a car,” he says as we’re wrapping up our conversation. A silage chopper, for readers unfamiliar with farm machinery, is a “giant, air conditioned, 600-plus horsepower lawn mower,” in Jeremy's words; and it just happened to be his main mode of transportation during high school summers spent in the fields of his uncle’s crop and cattle farm in Griffon, Indiana. “It was about the best summer lawn mowing job a 14-year-old could ask for.”

CAN YOU TELL US A BIT ABOUT YOUR BACKGROUND?

Sure! So if you go way back, for undergrad, I went to Bates College. I was a physics major there. From there, I went on to study mechanical engineering at Dartmouth, and then stuck around there for a little while and got two degrees while I was at Dartmouth: a second bachelors and a master’s in engineering management.

I got interested in the application of engineering on the business side. I worked at Ford for about three years after that in product and business strategy. I ended up going back to school after that because I got really interested in the digital space and wanted to change industries. I got my MBA at the University of Michigan, the Ross School. After school, my wife and I decided to move back East. I landed at a company called Compete, here in Boston, which was a web analytics company. After that, I got bitten by the startup bug and ended up joining a very small company that had just finished Techstars, called oneforty, which ended up getting acquired by HubSpot, where I spent six years building and leading the product team.

HOW HAVE YOUR PRIOR WORK EXPERIENCES INFLUENCED THE WAY YOU APPROACH YOUR ROLE AT INDIGO?

Along the way, one of the things that I have focused on is developing a customer-centric and iterative software development philosophy and approach. That old model of software development—where you sort of plan everything out, write this giant specification document, and then go off and build it, test it, and ship it—it’s completely obsolete. With that model, you couldn’t learn quickly or develop a better product as you went. The world of software has completely changed. Now everything is cloud-based, and software-as-a-service is the norm. You move from a months and years process to build software to a days and weeks process, where now you’re able to iterate very quickly, get something in front of a customer, and learn from the customer’s experience. With an iterative approach, you’re really upfront—talking to customers, understanding what their needs are. That’s probably the biggest thing that I’ve learned over the 10 years or so in software product development before I got to Indigo: You can move faster, you can develop better products in the end and create a more successful solution.

YOU’RE NEW TO THE AG WORLD. WHAT HAVE YOU LEARNED IS MOST CRITICAL TO DEVELOPING PRODUCTS AND PROGRAMS THAT APPEAL TO A WIDE RANGE OF GROWERS?

It’s funny: I don’t have any professional experience in agriculture, although when I was a kid, I spent about three or four summers in high school working on my uncle’s farm in southern Indiana. I have this experience that was part of my early development where I kind of know what it’s like to be on that farm and work really hard, and go through the time cycles. Never having run a farm, I don’t know the business side of it, however. But it’s just been so much fun to learn from the folks at Indigo. One of the things that’s amazing about Indigo is we have a massive depth of agricultural experience within the company. The people here in Boston, but especially those down in Memphis, are a wealth of ag knowledge.

In general, I would say it is important to understand your customer.  Oddly enough, it’s not necessarily as important that you have the same experience as your customers. There’s an interesting thing that happens: If you understand an industry inside out, you can sometimes put yourself in a mental box. It’s often easier to get out of that box if you don’t really know where the edges of the box are. If you come from an industry, more often than not, you may be missing a broader perspective.

DIGITAL TOOLS ARE NOT A NEW CONCEPT IN MODERN FARMING, BUT ADOPTION HAS — ON THE WHOLE — BEEN SLOW. HOW IS INDIGO APPROACHING THIS DIFFERENTLY TO OVERCOME THIS ADOPTION CHALLENGE?

The interesting thing is, agriculture is—at its root—a data-driven business that has not been driven by data up to this point, by and large. We’re at this really interesting point where we’re able to start collecting and amassing massive amounts of data, but even with all the tools that exist in the industry, the challenge is that most of them are still not actionable; a lot of the tools out there right now give you a way to collect information, but it kind of goes into a black hole.

Indigo is uniquely positioned because of our model and our go-to-market strategy. Our approach is focused on helping farmers be more profitable, first and foremost. One of the ways that we think about technology is how we can give prescriptive advice and insights as opposed to just providing [farmers] with data. You don’t want to tell people what to do, but you can provide guidance. We actually want to take that [data] and produce value from [it] to help them drive continuous improvement on their farm year after year after year—with a focus on profitability, not simply yield.  Additionally, we want to do this though relationships. Farming is a relationship business in many ways.

WHAT’S THE MOST REWARDING PART OF WORKING AT INDIGO?

The most rewarding part is the collaborative nature of working with a team—the close-knit team that we have on the software product development team, and on the technology side in general. Working day-to-day with them, the environment’s great; there’s just a lot of discussion, and engagement, and solving problems, and moving quickly

And it’s all tied to this big mission that we have. One of these things that’s just amazing—and that really attracted me to Indigo to begin with—is [that] it’s a mission-driven company like I’ve never seen. And it’s a real mission. Lots of companies have missions that drive them, but [ours] is one that you can’t help but get behind. When you think about making growers more profitable, conserving natural resources, and doing it in a way that connects consumers to a better and healthier food supply: I can’t think of anybody who can’t get excited about that mission.

IS THERE A FOOD YOU CAN’T GO WITHOUT?

I have to pick just one, huh? Oh man, it’s probably coffee! I’ve got a little bit of a coffee problem. I’m a self-professed coffee snob—I like really good quality coffee.

I don’t know why, but strawberries come to mind. Fresh picked strawberries are amazing; they’re also healthy. Just anything that has strawberries in it is going to be good, by and large. Nothing better than going out in June and just picking strawberries right off the farm, and just eating it right there…so good.