Looking Back to Move Forward: How Today’s Carbon Farming is Rooted in Indigenous Growing Practices

In June 2022, Indigo’s carbon program generated 22,000 credits of CO2e in our first issuance, establishing Indigo as one of the leaders on high-quality carbon credits. We were able to do so by partnering with farmers to implement practices such as cover cropping and reduced tillage, reshaping how sustainable and profitable agriculture looks for a new generation. These “new” sustainable agriculture practices are actually a return to ancient methods that are rooted in the people who first cultivated the land hundreds of years ago, like the Iroquois1, the Anishinaabe2, the Mayans3 and many others.

Farmers are recognizing the co-benefits that come from changing their management practices from increases in yields, water and nutrient retention, and Soil Organic Carbon (SOC)4, to decreases in soil erosion, pests and diseases. If regenerative practices produce a net positive for the climate and conventional farmers’ yields, why did they ever fall out of favor with the agriculture industry?

In the 1800s, modern industrial agriculture began to take shape with the goal of increasing yields and reducing labor. Fertilizer was developed in the 1940s, and tractors became ubiquitous in the 1950s. By the 1960s, growers began to ramp up industrial-scale yields to feed the growing human population by applying fossil-fuel energy, mechanics, and new crop breeding techniques. While this culmination of modern technology significantly improved farming efficiency and capacity, giving farmers competitive advantages, it also dramatically increased energy and fossil fuel demands. What was gained in yields also increased soil erosion, greenhouse gas emissions, nutrient loss to waterways, and carbon oxidation. Additionally, the higher equipment costs made it more important for farmers to specialize in a few crops, ultimately reducing crop rotation and crop diversity in fields across the U.S. 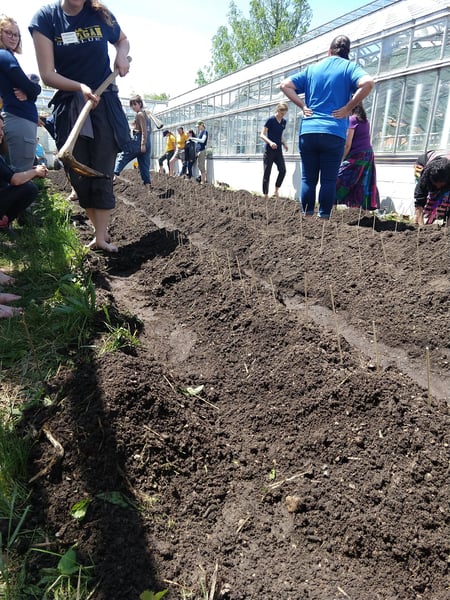 At Indigo, we’re working with key stakeholders across the agriculture industry to innovate practices that help farmers grow efficiently, sustainably, and profitably. We envision a future where farmers are maintaining or increasing yields while reducing their dependence on energy inputs, solving nutrient loss issues and water quality problems, and reducing or reversing carbon loss from the soil to slow the impact of climate change. Indigo’s scientists are leveraging the sustainable agriculture practices and knowledge base established by the Indigenous growers who came before us can help today’s farmers build a more resilient agriculture for future generations.

These practices are gaining momentum. Between 2012 to 2017 the number of farms using intensive tillage methods declined by 35%.5 Widespread adoption has been slow with some farmers hesitant to change methods ingrained for generations, while others state the upfront financial cost of new inputs, such as cover crops, as being too high6. Yet, many farmers have developed new ways of understanding the value of cover crops, from reduced cost operations and labor to improved nutrient density and fertilizer efficiency, to compensate them for the additional value of carbon sequestration. Indigo is addressing the transitional hurdles from sustainable farming to carbon credits and creating new ways for farmers to offset the costs while also generating new streams of revenue.

Regenerative agriculture is often seen as a product of the Green Revolution, the term itself being coined in 1980 by Robert Rodale at the Rodale Institute7. But the practices that are implemented under regenerative agriculture are quite old, derived from premodern ecological principles from Indigenous and native cultures.

Tilling soil is an old practice that has become synonymous with modern industrial farming. Gas-powered farming equipment made tilling much more efficient, but where efficiencies were gained, soil health was lost in the form of soil erosion, carbon and nutrient loss, and water quality.

The alternative, no-till farming, is another approach that has existed since ancient Egypt, when sticks were used to make holes and feet, or hands were used to cover up after seeds had been planted. Farmers in Central and South America also used no-till practices, followed by a period of intense tillage during mechanization. In an effort to prevent further soil erosion, South Americans returned to no-till practices. The benefits of healthy soil that ancestral farmers on American farmland as growers adopt no-till practices8.

Intercropping, the practice of growing two or more crops at the same time on the same piece of land, is often lauded for the benefits of nitrogen fixation and pest management. While not often practiced on large-scale . This practice, known to some as the Milpa Cycle, is still used by those of Mayan culture. Those that practice the Milpa Cycle or Three Sisters rely heavily on biodiversity in order for it to work. By mixing and matching different types of crops and species, they can naturally combat various pests and diseases.

Monocropping became popular with the growth of industrial agriculture due to rising equipment and infrastructure costs. While monocropping reduced costs and helped meet large scale demand for commodities, it opened the door to increased disease, crop failure, and loss of SOC9. Crop rotation helps minimize the damage and restore the nutrients needed into the soil. While regaining popularity now, crop rotation originated over 3,000 years ago in Han Dynasty China. It was long used and understood to help restore fields that had poor soil productivity. Today, the practice is once again gaining traction in the U.S. Although the benefits of crop rotation on corn farms have been observed since the early 20th century, it can be difficult to establish supply chains for new crops when significant investment is required on the part of grain elevators and growers.

These ancient practices are foundational to Indigo’s goal of harnessing nature to enhance farmers’ sustainability and profitability. We owe these practices to the Indigenous people and cultures who cultivated the land for many thousands of years before us and built the knowledge base that we rely on to support our farmers. We are grateful for the legacy of these Indigenous growers for helping us restore the earth’s fertility and resiliency for generations to come.

How Farmers Can Win in a Carbon Program