It’s that time of day: The snack attack is hitting. What if you could choose a snack that helps remove greenhouse gases from the air? Sounds delicious—provided it tastes delicious. And the price is right. And it’s at your local grocery store. This is the challenge that Airly crackers is taking on—and solving in collaboration with farmers, soil scientists, and consumers ready to vote on their values with their dollars.

“Airly is the world's first climate-positive snack cracker to remove greenhouse gas from the air with every single box,” says Jennifer McKnight, co-founder of Post Holding’s Bright Future Foods, which launched the Airly crackers line in 2021. “Our mission is to reverse climate change through food. Fundamentally, we are hoping to be a lighthouse brand that really challenges the potential for what food can do.”

Currently, food is responsible for between 25 to 33 percent of the total greenhouse gas emissions, depending on your source. That sizable footprint led the Airly team to ask: “What if instead of making a product that's just less bad, we make a food that actually removes greenhouse gases from the air?”

The huge untapped need that's out there today is consumers want to vote with their values without making tradeoffs.

With big potential comes hard work. “When we first started this, we had no idea if it was possible,” McKnight recalls. “We were talking with some of the world leading experts out there, and, candidly, they weren't quite sure if it was possible either.” In order to produce a cracker that actually has a carbon-negative footprint, they had to find soil scientists who could build a program from seed to shelf that demonstrated greenhouse gases were removed from the air using the best science, resources, and standards available.

“The real magic for us began when we brought together world leading soil scientists and climate scientists with the farmer to make sure we were not only optimizing practices on field, but also identifying the farms with the best potential to remove the most CO2 possible,” says McKnight.

Hailey Summers, a scientist for carbon modeling focused on the Airly product as part of an Indigo soil science team based in Fort Collins, Colorado, sees a lot of lessons to be learned from Airly’s model. “Brands can and need to be formed around aggressive sustainability goals,” Summers says. “Airly’s rigor in sustainability accounting and reporting is second to none.”

Pick up a box of the cloud-shaped crackers, which come in cheddar, chocolate, sea salt, and salted caramel. Flipping to the box’s backside reveals an array of beach balls representing the volume of air freshened by CO2 removals with each box. Airly’s farmers – mainly in South Dakota and southern Canada for oats; Michigan for wheat – are paid a premium for producing climate-smart grains using carbon farming practices such as cover crops and reduced tillage. “We're happy to report that in our first harvest, we were able to go carbon negative with our oats. In our second harvest, we were able to go carbon negative with oats and wheat, and we've continued to work on additional grains, too,” says McKnight. “We see this as a potential to really scale in a big way.” 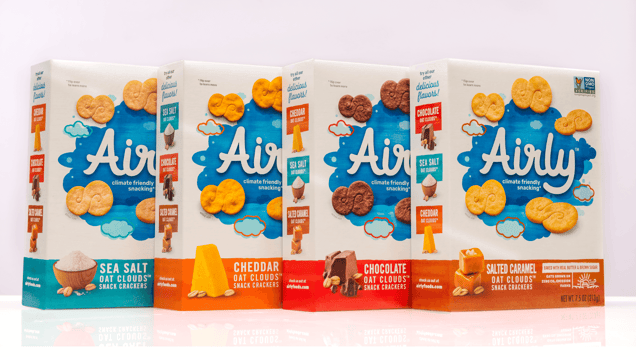 As sustainability becomes smart marketing, some may wonder if the claims around carbon reductions are true. This was a big concern for the Airly team. “From a consumer standpoint, we're making a really big promise: a box of Airly will remove 21 grams of CO2 from the air. I need to make sure that that is absolutely 100% factually correct,” says McKnight. “So, when we think about being able to translate on-farm activity to the claims that are on the package, the science, technology, and clarity of identity preservation from the field to the shelf is critical. Fundamentally, we could not deliver this product if we couldn't deliver that level of transparency.”

This transparency required a life-cycle assessment of the five phases of product life: ingredients, baking, total transportation, packaging, and end-of-life. Airly chose to work with crackers because of the relatively short list of ingredients – as well as the clear affinity it received from customers – but that did not make quantifying the positive impact each box sold could have on the environment easy. Summers remembers, “Obtaining carbon footprints for land management practices that regenerate the soil is a pretty new concept for consumer brands, so we had a lot of work to do to get started.”

“The huge untapped need that's out there today is consumers want to vote with their values without making tradeoffs,” says McKnight. Airly is another step forward in that industry-wide pursuit.

Find out how Indigo can help.

What is Carbon Farming?

5 Takeaways From the Carbon Farming Connection

Tips & Tricks to Succeed in a Carbon Program