March 11, 2021. Since last month, Indigo’s forecasts for both Argentine and Brazilian crops have improved slightly as the La Niña weather pattern continues to bring hot and dry conditions to Argentina and wetter conditions to Brazil. Of note, soybean harvest is well behind average in Brazil, at 38% currently versus 53% last year, due primarily to a torrent of rainfall.

“Wet weather such as this usually occurs in January when fewer soybeans are mature and ready for harvest,” says Michael Cordonnier, an agricultural consultant providing up-to-date information about soybean and corn production in both North and South America. “The nearly constant wet weather during February hit at a very inopportune time when a lot of soybeans were mature and ready for harvest. As bad as this is for the soybeans, it could end up being worse for the safrinha corn.”

After such a delayed start to the growing season in October, farmers in Brazil are still forecasted to see slightly above average yields while Argentina is finding themselves behind the 5-year average for crop health, in some cases drastically. Argentine corn yields are especially behind at 17% below trend, while soybeans – the country’s far larger export – is 6% below trend. At current forecasts, this would bring the second worst yields in the past five years for Argentine corn and beans.

Pockets of optimism and resilience in Brazil include Carlos Augustin, a second-generation farmer who manages corn, soybeans, and cotton on 20,000 hectares of Mato Grosso land. After dry weather delayed planting by 15 days, which led to a “25% decrease in productivity” for Augustin’s soybeans, adequate rainfall through the middle of the season allowed the crop to rebound to now only 5% behind expectations, he says. Both his cotton and corn health, meanwhile, are looking identical to past years. 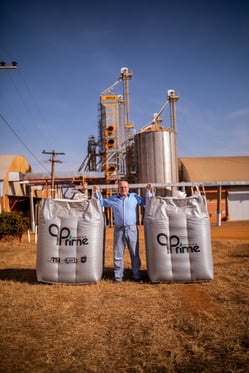 Looking ahead to next month, we will be in the heart of the safrinha season and have updated production numbers for South America this year.

Interested in learning more? Watch the webinar below, featuring a deep dive on South American production from analysts and scientists on our GeoInnovation team.

Disclaimer: This document is not for public distribution and has been furnished to you solely for your information and must not be reproduced or redistributed to any other person. This material is for the personal information of the authorized recipient and Indigo Ag. Inc. (“Indigo”) is not soliciting any action based upon it. This report is not to be construed as an offer to sell or solicitation of an offer to buy any commodity or commodity derivative to any person in any jurisdiction where such an offer or solicitation would be illegal. It is for the general information of clients of Indigo. It doesn’t constitute a personal recommendation or take into account the particular investment objectives, financial situations, or needs of individual clients. In so far as this report includes current or historical information, it is believed to be reliable though its accuracy or completeness cannot be guaranteed. Neither Indigo, nor any person connected with it, accepts any liability arising from the use of this document. The recipients of this material should rely on their own due diligence and receive their own professional advice. Price and value of the commodity referred to in this material may go up or down. Past performance is not a guide for future performance. Certain transactions including those involving commodity derivatives involve substantial risk and are not suitable for everyone. The report is based on information from different sources, some proprietary and some public. Opinions expressed are Indigo’s current opinions as of the date appearing on this material only. While we endeavor to update on a reasonable basis the information discussed in this material, there may be regulatory, compliance, or other reasons that prevent us from doing so. Readers of this report are cautioned that any forward-looking statements are not predictions and may be subject to change without notice. Our proprietary trading may make trading decisions that are inconsistent with the recommendations expressed herein. We and our affiliates, officers, directors, and employees worldwide may: (a) from time to time, have long or short positions in, and buy or sell the commodities mentioned herein or (b) be engaged in any other transaction involving such commodities for compensation or have other potential conflict of interest with respect to any recommendation and related information and opinions. No part of this material may be duplicated in any form and/or redistributed without Indigo’s prior written consent.